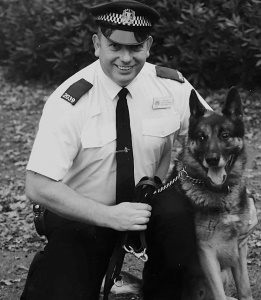 Neil Bell brings 35 years’ experience to the role of Project and Development Manager at RFA Security.

Neil started his dog career with the Royal Air Force Police in the mid 80’s working on sensitive sites throughout the United Kingdom. He developed a keen interest in how the dogs worked and how they were trained and qualified as a Practical Training Assistant.

On leaving the RAF Neil joined Hampshire Constabulary where he worked as a patrol officer for the first 10 years, before qualifying as a Police Dog Handler. Within 12 months of qualifying Neil was also working a proactive search dog.

In 2005 Neil qualified as an ACPO police dog instructor and went on to pass instructor courses in Tactical Firearms Support, Drugs and Explosives. Before leaving the police in 2018 Neil spent 6 years as a full-time instructor at the Joint Operations Unit Dog Training School of Hampshire and Thames Valley Police.

Neil has now qualified as a NASDU recognised instructor for Patrol, Drugs and Explosives. Neil continues to learn every day and enjoys sharing his knowledge and experience.

The decision to use explosives detection dog services often means that a business or organisation has an increased risk or threat.  You may have not yet reached a final decision to include sniffer dogs in your risk management and are simply looking at available resources and competencies.

Please contact RFA Security Services to assist you with your procurement research, you will have confidential access to one of our directors and experts in this subject.  You will find us friendly and extremely professional, but above all our information and advice is provided free of charge and absolutely without any obligation to use our services.

Meet a few of our team members